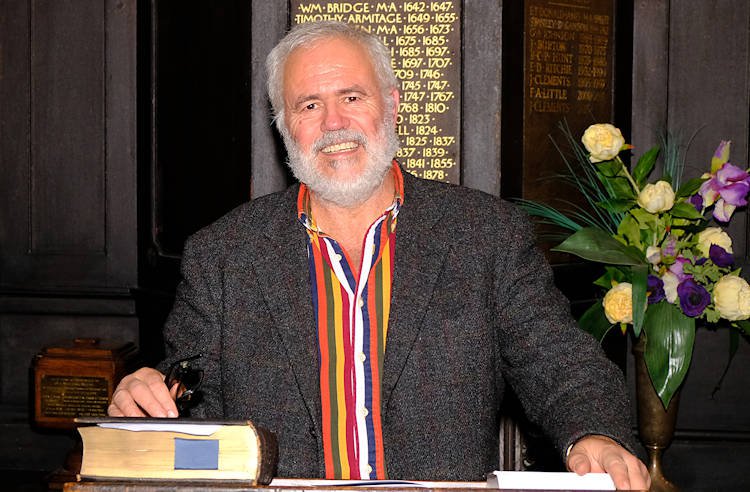 Former police sergeant and now “Salvation Detective” Tony Francis spoke to a Norwich audience recently of how he has used his sleuthing skills to unravel the spiritual heritage of the USA.

It is exactly 400 years in September since the Mayflower crossed the Atlantic from England to America packed with pilgrims (many from East Anglia) looking for a new life with religious freedom.

During the quieter times on the museum galleries he dedicated himself to prayer and unwittingly gained a thirst to investigate the hidden spiritual messages behind the antiquities under his charge.

A series of natural and supernatural God-given clues, ironically, led him back to his home town of Harwich in Essex where, he claims: “I unravelled the origin of the spiritual heritage of American, and arguably, the Western World, with scripturally-backed evidence of God’s holy portal from which He anointed the leaders of both the Jamestown Expedition and the Mayflower Pilgrim Fathers adventure.”

Speaking at The Old Meeting House, Norwich, in January, Tony spoke about his tough and painful upbringing, told anecdotal tales from an entirely adventurous police career, and enthusiastically articulated the main characters connected with the famous Mayflower vessel.

“The ship and the captain are inseparable, yet it has been the ship, Mayflower, which has been the focus of the origins of American civilisation. Master Christopher Jones of Harwich, a middle-aged merchant man, and much underestimated, guided this tiny, old and weather-beaten ship and its passengers, where many of greater stature had failed. Jones was selected over the more qualified Captain John Smith (of Pocohontas fame) who had experience and military prowess from his previous visits.”

Initially two ships set off. The Speedwell leaked so badly she had to be abandoned after sailing just 300 miles. They returned to Plymouth. This did not deter Jones; he took on many extra passengers and set off once more without an escort and his ill-equipped cargo ship rammed full of land-lubbers. Jones had no experience of passengers and these were despised religious dissidents - many out of exile in The Netherlands. The largest percentage of known passengers came from Norfolk.

The odds were against him. A ship’s master took a precedence over all other leadership - Jones knew his responsibility. He was a man of social standing and conscience, having held civil office in his home of Harwich. He also knew that his faith beliefs would be different to those of his passengers.

The anticipated 21-day crossing turned to 66. Jones maintained confidence, discipline and the sea-worthiness of the battered ship.  So bad were storms that sail could often not be used.

“It is incredible that out of this hazardous trip, a foundational document to the American Constitution emerged. An ‘agreement’ was drafted – these were people of ‘Covenant’ values, drawn from the Bible. Consequently, the famous Mayflower Compact - a radical document of equality - was drafted. It is, in some ways, a remarkable tribute to Jones, who did not even sign the Compact,” said Tony.

“Jones went beyond his contract with these passengers. He was to deliver a cargo to a continent. He could have dumped them on a sandbar. What he did was secure their passage and their passing. He assisted with finding a settlement. He led expeditions to secure the right place to settle. He supplied a secure retreat for them in the Mayflower as they foraged for sustenance, fighting the Indians, hunger, wildlife and the appalling weather. It is said by climatologists that this winter was ‘a little ice age’. He could have expelled them from his ship or simply left them. Instead he actively assisted them.”

Fatigued by the trip, Jones died nine months after his return - an indication of his dedication beyond the normal call to duty of a moderate merchant seaman of no notoriety.

Tony concluded: “As we approach the 400th anniversary of this ‘amateur’ expedition from tyranny, at the root of American heritage in September, it is time to recognise Master Christopher Jones of the Harwich Mayflower for his heroic leadership.”